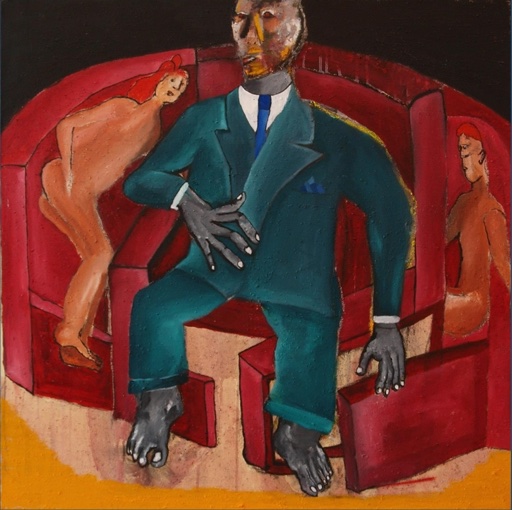 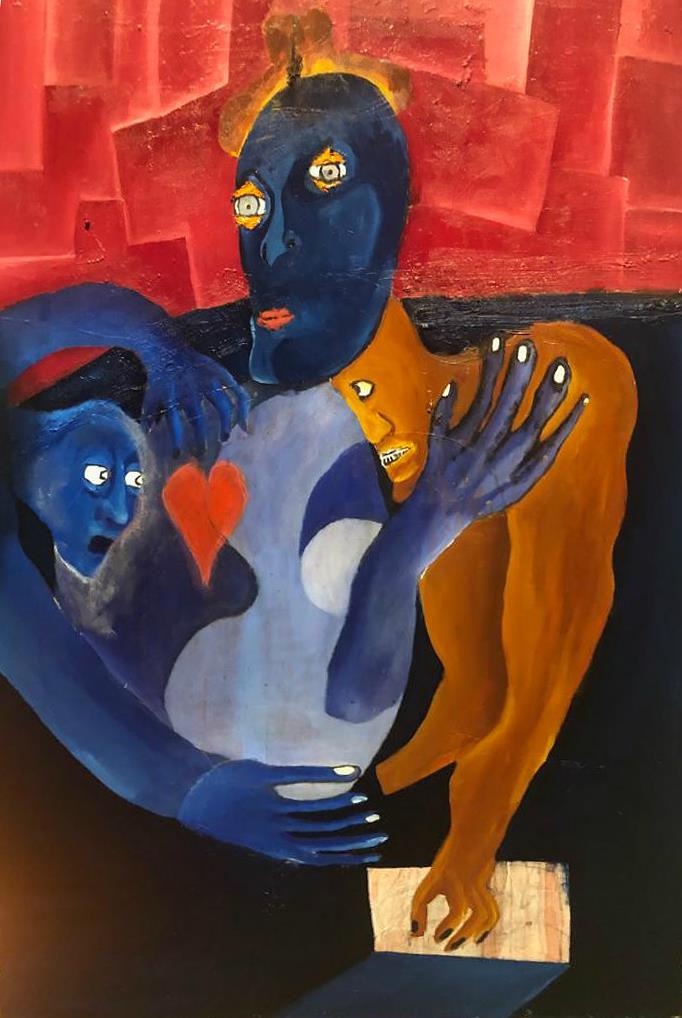 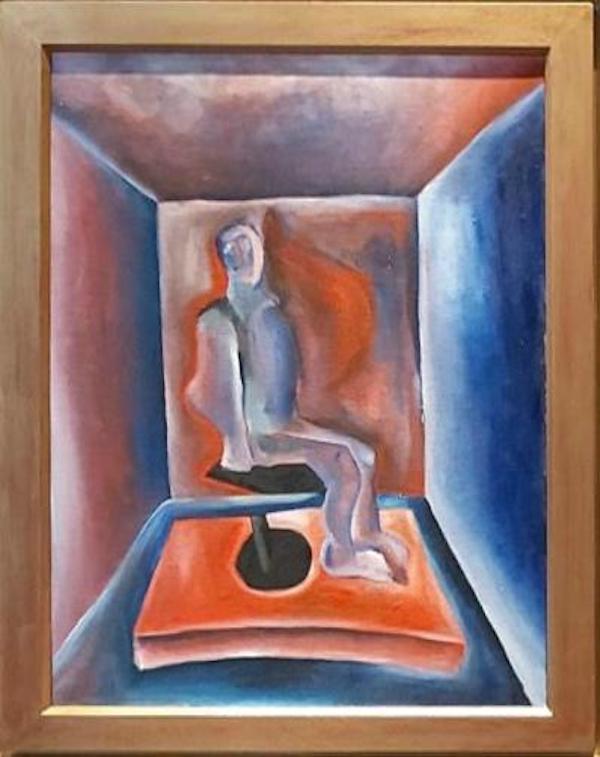 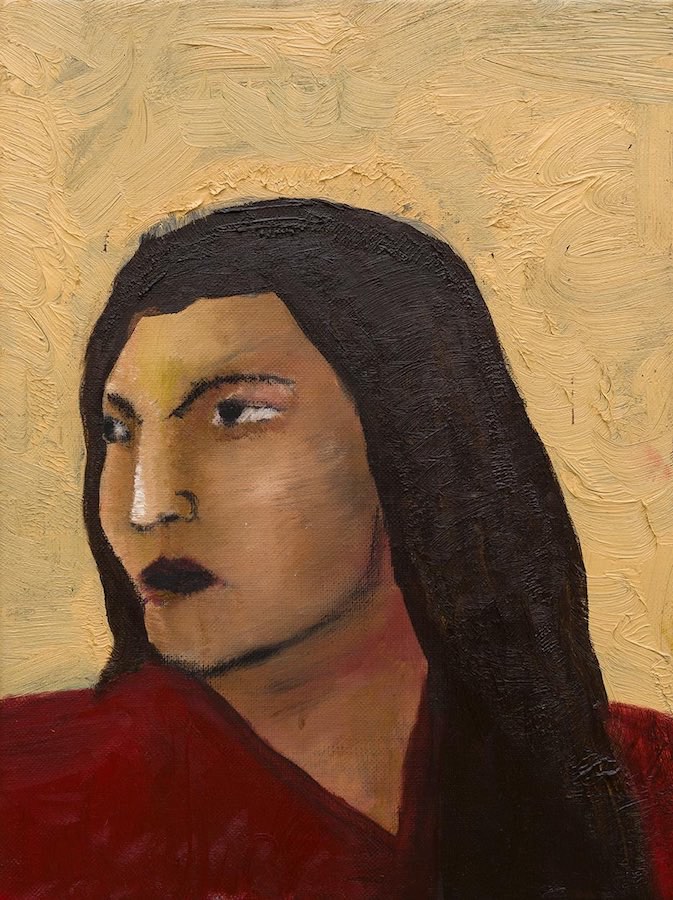 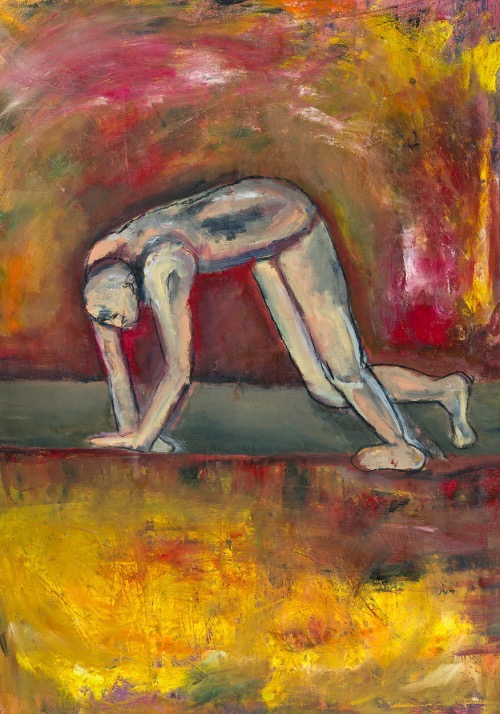 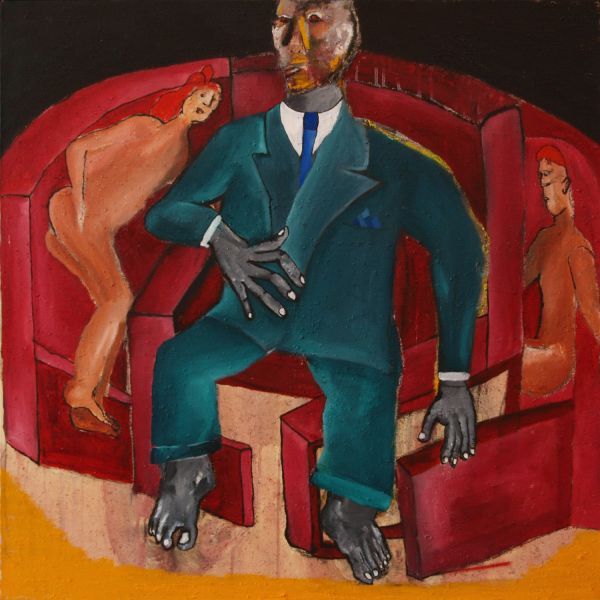 When young emerging artist Rhed first burst onto the art scene with his first solo exhibition at Tanya Baxter Contemporary in 2018, he was hailed by some as the new Basquiat. There was a flair, an excitement in his paintings. Having an eclectic cultural background, with a childhood spent between New York and London, his paintings exuded an engaging mixture of innocence and confidence. He embraced an expressionist style and vibrant colours, coupled with the freedom and dynamic energy of New York graffiti art.  His time in New York was the beginning of his adventure into creating compositions on a large scale, expressing emotions and being motivated by the adrenaline of the city.

This unfettered approach emanated perhaps from Rhed’s early exposure to many artistic disciplines, from cinema to performing and visual arts. As a teenager, he was fascinated by cinema, inspiring him to create storyboards, short films and fine art photographs. He has also always loved music and feels it is an integral element of his art.  There is a strong rhythm in Rhed’s painting; the beat and pulse playfully control the canvas.

Moving to London to study fine art several years ago, Rhed embarked on a more academic and studious path. With an eagerness and an appetite for learning, he attended all the major museum and gallery shows, meeting some of the iconic legends of the art world including Peter Blake, Paula Rego, Anthony Eyton, Ken Howard and Frank Auerbach. He remembers being so impressed by the latter: “What I find most extraordinary is the discipline, vision and sheer guts it takes. I love the fact that Frank Auerbach is so deeply ensconced in his work… For over 60 years, he has had so much to achieve and depict on canvas, he resents missing any time away from the studio.”

Rhed reveres the artists of the London School, including Auerbach, Lucien Freud, Francis Bacon and David Hockney. He came to understand that through their technical excellence, they succeeded in pursuing forms of figurative painting in the face of avant-garde approaches in the 1970s. By depicting the figure and their own everyday landscapes, they succeeded in conveying in a broader sense the vitality of the human condition. Rhed aspires to emulate their intensity of figurative painting in his own works.

After a post-graduate diploma at Central Saint Martins, Rhed enrolled in the Royal Drawing School in Shoreditch, where he took to the more disciplined training immediately and where he continues to study life drawing today. The traditional skills he has acquired there are more evident in his latest series of paintings. “I believe that one’s technical ability can always be improved. Especially as a young painter, I want to learn all the rules before I can break them.”

Already in his second exhibition at Tanya Baxter Contemporary last year, Rhed displayed a more structured approach in his self-portraits and portraits of family and friends, as well as a greater psychological intensity. Over the past year, he has developed this further, while continuing to explore different artistic approaches.

“I feel that my painting style has changed a lot over the years through a mix of intense life drawing, growing up, and being constantly inspired by the world around me. My main subject recently has been discovering deeply the anatomy of the human body. Not so much the structure but as an object of beauty, how it moves, ages, changes...”

Important influences lately have been a combination of mid-20th century painters and photographers, especially the German-American photographer Helmut Newton (1920-2004), whose subversive approach brought an edge to fashion photography.  Newton’s beautiful, powerful work is also disturbing, often evoking a sense of intense but unexplained drama. “What intrigues me about his work is how he lets the human body speak for itself,” says Rhed. Several of Rhed’s paintings imply similarly unspoken psychological dramas.

The title of the new exhibition “As Above, So Below” perhaps originates in this idea, as Rhed explains, “I am fascinated about the inner and outer world, especially where they meet. I would say the work in the show captures that feel of what is real and what we think is real.”

The process of Rhed’s painting varies, especially if he is painting from life. “Normally I have quite a lot going on in the studio – loud music, sketches everywhere, lots of people around – ironically [all this helps me] concentrate. However, when I have a life model in the room, I want the complete opposite: the silence and intimacy make me understand better who I am really painting.”

Rhed is a painter of the 21st century and speaks for the millennial generation. It is so encouraging that he takes such a serious approach to figurative painting, displaying a passion for art as well as a modesty and an eagerness to explore and assimilate. As he says, “The most important thing for me as a young artist is to keep my dignity as a painter. What I mean by this is to constantly be changing, creating, and marveling at the never-ending beauties of the world we live in. For me, it’s a marathon, not a sprint.”

From Picasso’s early academic studies to the surprising pictorial landscapes of Lincolnshire that Bridget Riley painted in the 1950’s, there is a tendency for artists to be self-depreciating and overly critical of their early career.  In his depictions of the human form, Rhed transcends the boundaries of both classical figuration and contemporary figurative abstraction.  He uses oils thickly applied, moving the brush across the canvas with gestural brushstrokes which become visceral and lively.

The complex combination of Contemporary fame, radical changes in style and trend (NFT’s, iPad drawings etc) serve to demand the art market to create easily understandable aesthetic works, this, in turn, has influenced many artists to produce ‘populist’ works, rather than challenge themselves whilst we have witnessed a steadfast approach of Rhed’s draughtsmanship and technical skills, the larger than life characters and bold palette are daring and refreshing avant-garde works for this young artist.  Rhed’s enduring inspiration comes mid-century painters such as The School of London, Lucian Freud, Francis Bacon, and Paula Rego, also the photographer, Helmut Newton, his subjects in his compositions often have similar psychological tension, but he breaks away from the dark mood and tones by using a colourful palette and playfully painting looming figures in the middle of the canvas, often set against a monochromatic abstract backdrop, giving his paintings a surreal magical quality that serves to create a strong emotional narrative.

I have watched Rhed hone his skills and make his mark amongst collectors and critics alike over the last four years, he is not afraid to reveal the intrepid journey of an artist, striving to perfection, but enjoying the long road, if you have the guts to be making work and putting it out there, be proud of yourself and have fun with it.

As Freud said, an artist must “put in everything” and maybe in the process, find a certain truth.

Rhed is 20, which is good fortune.  He is an authentic, pure, and undiluted product of the 21st century.  For me he is a genuine original who paints for his generation as well for himself.

Though not a prodigy, he has matured at breakneck speed.  He began making art at age 17, with immediate technical skill.  Before he got to the Royal Drawing School at age 18 he was signed up by an established London dealer.  This is a rarity for an art student.

His portraits are real people.  They are close personal friends - young and old - and his artistic circle at the Royal Drawing School.  He has given himself full freedom.  On face value most seem anxious and introspective while some have taken a punch on the nose from life.  Or, like ‘Laurence’, they look to have lost it all in the casino.  I ask if this is how they are in real life.  “Yes,” says Rhed.  It’s a Boho group, “pensive and morbid” in his words, but he does not distort them.  That leads to the question: is he painting his generation - the ‘Snowflakes' - at the same time as them?  “It’s a mix,” he replies.

As this generation is a mystery, if not a blank, to its elders, this makes me pleased.

Since the fantastic energy and painful subjects raised by Hirst, Quinn, Emin and the Chapmans in the 1990s, art in England has passed time in an armchair.  No freshly burning themes, a lowered urgency, much repetition.  New starts are needed.  Rhed is not yet to be ranked with the Golden Youth who shook the world at Frieze in 1988.  But he is to be mentioned in their company.  He makes a powerful statement about Anxiety Now and points into the future.

The message concealed in his pictures is that there is ‘beauty in the struggle of life' - more beauty, he says, than when life comes easy.

“My generation seeks the fastest road to fortune that’s out there, the path of least resistance,” he declares.

“Life bears no pretty face.  Happiness is not just money and get rich quick.  Pain and sadness are part.  Beauty is hidden in this struggle.”  The Snowflakes, he thinks, are avoidant of hardship.  They complain to their parents: “I’ve had it worse than you and you can’t understand it.”  They are “abnormally sensitive”.  Nobility, Rhed asserts, lies in those who address misfortune, in those who are knocked down but make “a new beginning”.

This is his third exhibition curated by his gallery, Tanya Baxter Contemporary.

Godfrey Barker - Has been Art Market Correspondent for the Daily Telegraph, the Evening Standard and the BBC and is currently finishing a book, ‘Art and Money’, on the price of painting since 1850.

Good artists are those that turn energy into something beautiful that resonates with the eye. Anyone can be a painter, but it is a question of making others think, and provoke Feelings. Rhed has matured as a painter in the last couple of years, I am very pleased he continues to learn the skills at art school he needs to equip himself as a painter that will last the pace of time and trends.